Mandalay Bay Massacre, Multiple Shooters Reported by eyewitness, and Windows on two floors smashed out. Could Paddock be a False Flag Fall Guy, was Paddock just a hostage and later murdered as a Fall Guy by an Elite Professional Deep State Death Squad?

Paddock worked as an Accountant​ for Lockheed Martin and was a former NASA Worker meaning he probably had Deep State connections and Probably was one of the 4 Million Americans with just Secret Clearance (800,000 have Top Secret). Paddock’s father was a bank robber giving him a good family history to be a good fall guy. 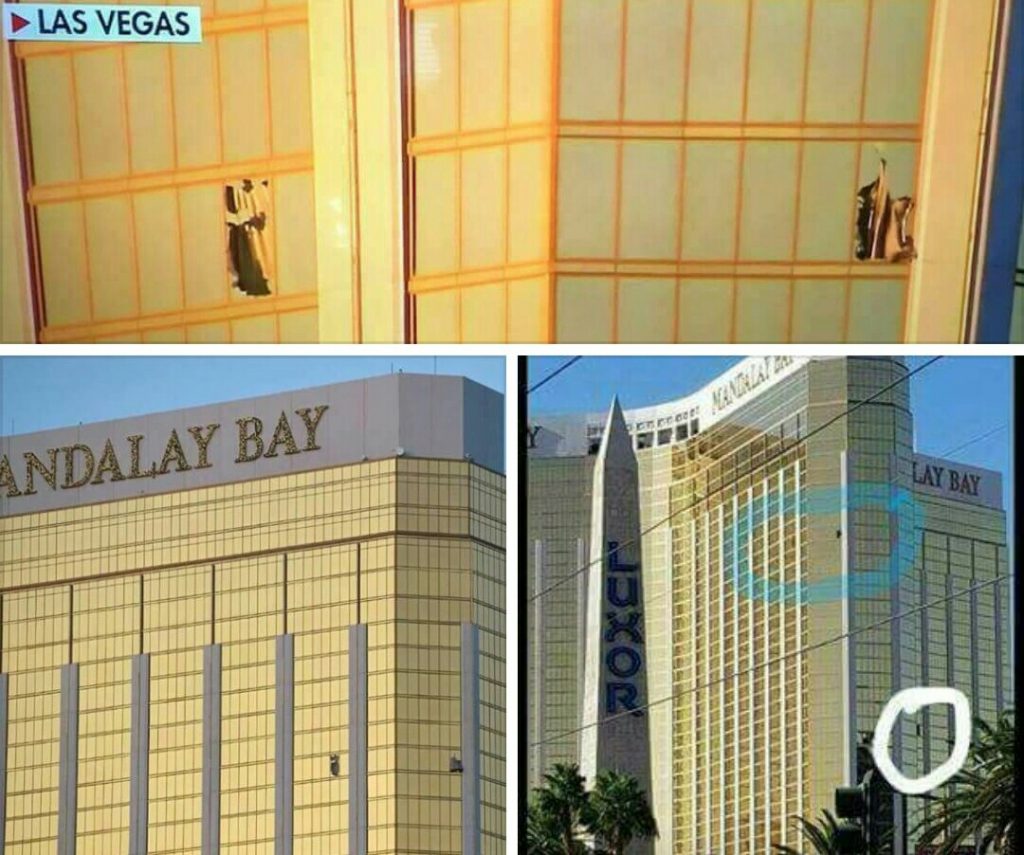 Let’s go over the Facts, this was the Worst Mass Shooting in American History, it was done with Military Precession from an alleged single non military man, an Accountant​ and former NASA Space Nerd. Multiple eye wittinesses reports multiple shooters and it often sounds like two or more guns are going off at the same time and not just echos or richettes, but others can be explained off as switching weapons. But there is pictures of the Hotel with smashed out Windows on two floors and the other floor besides the 32nd does fit some eye wittiness accounts (Black Former Marine Security Interviewed by Fox News when he finally left the area after helping out after for hours, was live on Air).

Now let’s dig deeper, this was probably one of the most vunerable locations for a mass shooting in the Country, a venue sorrounded by endless unsecurable vantage points that anyone can rent, no Stadium is surrounded by that many sniper points for sale. This was the perfect target and the attack was exucted with Professional Elite Lethality by an alleged Accountant​ as eye wittinesses​ make accounts of multiple shooters. Does this add up? Or was something else going on and Paddock was the #DeepState #FalseFlag #FallGuy?

Rumors and Accounts are spreading across Socail Media of a Security Officer Shot by Police and Security chasing one of the alleged multiple shooters dressed as part of their hotel security. There attempts were made at breaching the 32 floor room; 1st by security, 2nd by the Cops (& I believe some SWAT) than a 3rd Successful Time by SWAT were Paddock was found with alleged self inflicted wounds. However why did the Cops before going to the 32 floor scourer the Hotel for Shooters, couldn’t they look up and see smashed out Windows on the 32nd Floor Spraying Lead, they were clearly looking for an other Shooter than the one on the 32nd Floor.

Reports of a passenger in a car getting hit seems like precision shooting or was the rest of the Car Peppered with Bullets? How many head shots and how many Rounds didn’t hit? Remember he was allegedly 100s of yards away and 32 Floors up with a so far cited 500 or so Rounds of Ammo with about 570 Shot or Trampled. The amount of Damage done does not add for 1 Accountant​ being 100s of yards away, 100s of feet up with only so much ammo, could Multiple Professional Deep State Gun Man have been involved?

Could of a Professional CIA hit team held Paddock Hostage as a Fall Guy on the 32 Floor, opened up fire from multiple positions, guided the Police and SWAT to room 32 and the Murdered Body of Podlock as they escaped from other firing positions? Could of a Professional Hit Squad poised as Security and Police and even had agents in other positions and guided their Gun Men’s escapes as they guided the real authorities to the Staged Floor 32 as the Agent in there escaped between the 2 & 3rd Entrance Attempt of the Room?

I think we all deserve answers, how many bullets were fired, how many hit their intended targets, how many shots were expert shots, was there bullet groupings around them or single clean shots from experts?

With 59 Dead and 527 Injured we can assume about 400 people were hit with bullets and the rest were trampled, how many bullets were fired from 100s of yards away from 100s of feet up and is that possible for all but the best Snipers? How many Cops died in total and Security, did they see something they weren’t suppose to?

In the end the Story in the building doesn’t make sense, cops were running around the building not caring at 1st for the 32 Floor, but Security was all over the 32 Floor, but one of them got shot in the leg and they all backed off, before SWAT found Paddock Dead, could Paddock been murdered​ and set up by a Professional CIA Hit Team as the Fall Guy and the 32 Floor was the distraction the rest of the Team needed to flee the area?

And Finally why were they holding the Death Count and Causality Count back for so long, they knew right away how bad it really was, can we trust the current number? It’s hard to believe all the Hundreds & Hundreds of Shot People all made it to the Hospital and our now fine with no more rise in the Death Toll? Could the Government’s be hiding the True Death Tolls of these Terrorists Attacks.

Reports were from 5 minutes to 20 minutes of firing, but now are at around 5 minutes (officially, could the firing have been going on before being reported like in the very 1st vid in this article) of Firing on 22,000+ People, and the Footage shows hundreds down right off the bat, was that the work of one gun or more, personally I think the opening volley’s and the amount of bodies on the Floor Clearly shows more than one Gun Firing. In the end math should show the Truth how many bullets fired compared to people hit compared to the shooters skill and distance.

Reported Previously at 5:20am Morning After Shooting

An off duty Fire Fighter at the concert reported he personally pronounced 20 Dead, was more people pronoucing the Dead than just that one Fire Fighter? People stayed behind for hours pulling the injured and dead from the concert but would not report the Death Toll like they were all debriefed. A young man stated that everybody left behind is dead.

Currently as of 5:20am Eastern Time they are looking for the Gun Man’s female Asain roommate, four others have been detained with no specifics.

The Death Toll could be huge, but hopefully with the Grace of the Laird it isn’t much more than currently reported.

Mandalay Bay Massacre, Multiple Shooters Reported by eyewitness, and Windows on two floors smashed out. Could Paddock be a False Flag Fall Guy, was Paddock just a hostage and later murdered as a Fall Guy by an Elite Professional Deep State Death Squad? Paddock worked as an Accountant​ for Lockheed Martin and was a former NASA Worker meaning he probably […]

END_OF_DOCUMENT_TOKEN_TO_BE_REPLACED

Everything You Know is Wrong: Hidden History

The Lost Megalithic Monuments of New Hampshire: The Indian Heads

a Wombing Nation, a Ride to Freedom, an Empires Undoing

“The Art of War by Sun Tzu”

Mandalay Bay Massacre, Multiple Shooters Reported by eyewitness, and Windows on two floors smashed out. Could Paddock be a False Flag Fall Guy, was Paddock just a hostage and later murdered as a Fall Guy by an Elite Professional Deep State Death Squad? Paddock worked as an Accountant​ for Lockheed Martin and was a former NASA Worker meaning he probably […]

END_OF_DOCUMENT_TOKEN_TO_BE_REPLACED

a Wombing Nation, a Ride to Freedom, an Empires Undoing

“The Art of War by Sun Tzu”

The Lost Megalithic Monuments of New Hampshire: The Indian Heads